Driving his Humvee through a village in Iraq, Staff Sergeant Bernard Talimeliyor cautiously proceeded. His vehicle had been modified by removing the doors to allow quick escape in times of peril. As he slowly proceeded he and his three comrades scanned the surrounding neighborhood. Up ahead stood a mosque known for enemy activity. As they approached the muslin sanctuary, Talimeliyor drove slow and steady. Flak jackets on, guns positioned for attack, the soldiers moved forward. Suddenly from out of nowhere, a single hand grenade was thrown into their armored vehicle. Reaction time was minimal as the soldiers dove for safety. The explosion was instant and loud. Shrapnel tore through the cab of the Humvee ripping into everything in its way. Hot metal ricocheted off the interior of the truck.  The blast left the men stunned, wounded, and temporarly deaf. Each scrambled as best he could to reach safety.

Talimeliyor grew up in the remote islands of Yap on the atoll of Ifalik . Located in the USA territory of Micronesia, Ifalik is populated by less than one thousand inhabitants. His father was a dentist and his mother a homemaker. With limited opportunities to choose from, he joined the United States Army. After twenty years of service with tours in Iraq and Afganastan he retired with honors and a purple heart. 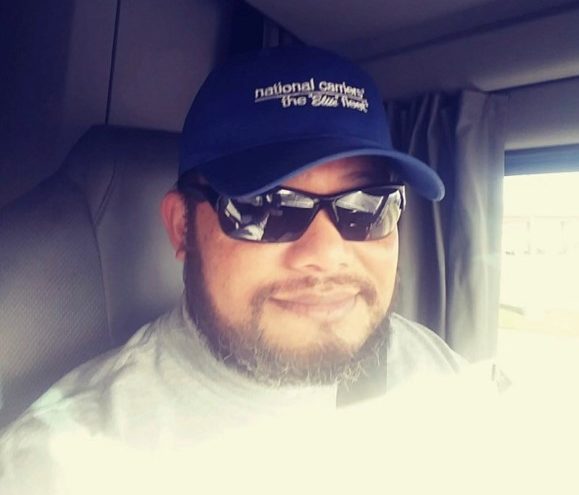 “Upon exiting the military, I decided I wanted to drive truck. I applied at a couple major trucking companies, but they turned me down due to my previous military injuries or my lack of experience. Combing the internet, I found National Carriers and was interested in what I saw. I have a friend who drives truck who told me to wait until she checked them out before applying. A couple days later she called and reported that National Carriers had a sterling reputation and was veteran friendly,” Talimeliyor recalled.

He completed the information required to join the paid training program National Carriers offers inexperienced drivers. After finishing orientation, he was teamed with Carlnasi Pete as his trainer. Pete was named National Carriers Driver of the Year in 2015 and is a senior trainer. In Talimeliyor’s words “He was a good trainer who would let you know when you were about to make a mistake and correct it”.

Pete reflected, “Bernard had been told prior to joining National Carriers that truckers needed to be aggressive when driving. I instructed him to relax and work in the flow of traffic. He learned very quickly.”

“I highly recommend National Carriers to any military members who are getting out of service and are interested in the trucking industry. This company will train you to become a professional driver and will also make sure that you get treated right. You will get a Veteran’s decal and license plate frame for your truck as a thank you gesture for serving this beautiful country, “Talimeliyor shared.

Bernard Talimeliyor appreciates the career choice he has made. He enjoys travelling and the solitude his career affords him. Much like his home in Ifalik he is an island unto himself.