Donna Davis Named Driver of the Month for The “Elite” Fleet

National Carriers, Inc. has named Donna Davis as Driver of the Month for October 2015. She is a resident of Junction City, KS. Davis began driving for National Carriers in March of 2014. She operates a company truck in the NCI Hide division.

“I am still in shock, it’s hard to believe I was selected as driver of the month. I just focus on doing my job safely and on time,” Davis shared.

National Carriers spokesperson, Ed Kentner stated, “As we compare nominees for this recognition each month the competition is fierce. Only the best of the best are considered and this month Donna Davis was a runaway winner. She displays an outstanding work ethic blended with a keen concern for the motoring public’s safety.” 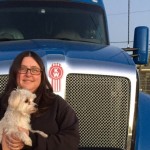