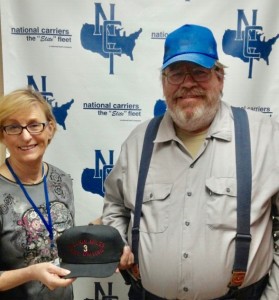 National Carriers, Inc. is pleased to recognize Colorado resident, Steve Neal, for driving three million miles without having a reportable accident. Neal began his driving career at the “Elite” Fleet over twenty one years ago. He has driven as a fleet driver, an owner operator and now as a company driver. NCI Director of Safety, Jill Maschmeier, made the presentation on behalf of National Carriers.

In a separate event, Russ Reinhard was named October 2017 Driver of theMonth. Russ has driven safely for NCI the past 10 years while setting a high standard for on-time pickup and deliveries. A resident of southern California, Russ focuses on delivering packaged beef from southwestern Kansas throughout the nation.

When named Driver of the Month, Russ stated, “Everything I need to be successful is here. I like the people I work with, the income is good, and National Carriers truly wants drivers to succeed.”

On behalf of National Carriers, spokesman Ed Kentner shared, “Steve and Russ are great examples of professional Class A drivers. Both put the motoring public first while completing the task of delivering promptly with all products intact. Always well dressed and customer oriented, these two drivers represent everything that is to be expected from the “Elite” Fleet.”