Eric Rogers Named Driver of the Month at National Carriers

National Carriers, Inc. has named Eric Rogers of Anthony, KS, NCI Driver of the Month for May 2017. Rogers operates a truck within the NCI Truck Leasing program on their Southwestern Division. He has delivered refrigerated goods to National Carrier’s customers since February of 2014.

NCI spokesperson, Ed Kentner stated that Rogers has successfully completed two truck leases. He is now leasing his third truck, a 2016 Kenworth T-680. Rogers has been driving trucks since 1992 with the last four-plus years at National Carriers.

Rogers exclaimed, “I came to NCI to lease a truck. I understand the challenges of operating my own business, but I also understand the rewards for doing do. Ninety percent of everything on my current truck is covered with the manufacture warranty. I feel the only way you are going to make money is to keep the doors shut and the wheels rolling. I appreciate the recognition National Carriers has given me.” 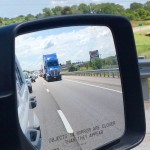