Jeff Gutzler has been awarded Driver of the Month for September of 2017 by National Carriers, Inc. He operates a company truck within NCI Hides Division where he recently celebrated his tenth anniversary. He and his wife, Billie, are residents of Portales, New Mexico. He is now a finalist for NCI Driver of the Year to be announced in April of 2018.

National Carriers spokesman Ed Kentner stated, “Jeff is one of the most upbeat, professional drivers in the industry. His appearance and attitude is always professional. Drawing from his military background he completes assigned tasks with minimal assistance. He has twenty-four years of safe truck driving with the last million and half miles with NCI. He is now eligible to compete for our NCI Driver of the Year Award in April of 2018.” 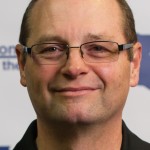 Gutzler explains his motivation while driving, “I am always looking behind, looking to each side, looking ahead, looking far ahead, always on the lookout for the other driver who may not be paying attention or who is driving dangerously. Defensive driving cannot be over emphasized. I am thankful the opportunity NCI has given me and I also appreciate being recognized as driver of the month.”