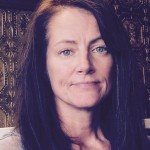 He Endangered His Life to Save Mine

Jamie Post had not felt well since returning from an out-of-town business trip. She couldn’t pinpoint her ailment other than a menacing feeling of impending misfortune. Several times on Monday she had walked to her pickup, became nauseous as she approached the vehicle, and in turn, returned to her house. Tuesday, Jamie got up early, forcing herself to load her dog for a trip to the veterinarian.

Martin Del Real had an early morning load of cattle to pick up northeast of his home in Dodge City, KS. As he does every morning, he kissed his wife Monica and went outside to start his truck. Routinely, while his truck warmed up, he prayed that he would have a good day and he and his family would be safe. His drive to the feed yard was uneventful.  As per his usual routine, Martin left home before the first light of day, meeting other National Carriers drivers at the feed lot, and helping the others load their trucks.

Jamie normally would use the bypass around the eastern edge of Dodge City when traveling from her home to her veterinarian, located northeast of Dodge City in Ness City. Today, however, she chose to go through Dodge City, negotiating the multiple stoplights and traffic. The sense of dread she had felt through the weekend still enveloped her. She felt no sense of urgency as she trudged through the traffic, heading east toward the rising sun.

Martin was the first truck of the NCI convoy to leave with his load of 36 cows. The other trucks would follow every few miles, spacing themselves out, allowing traffic to flow easily. Ten minutes into his trip, Martin realized he had not put on his seatbelt. For a moment he considered not putting it on, after all it was just a 30 minute trip into town. Thankfully, his better judgment won as he considered the negatives of a ticket or the consequences of an accident. Traveling the speed limit of 65 MPH, he headed west toward his destination of National Beef Packers in Dodge City. 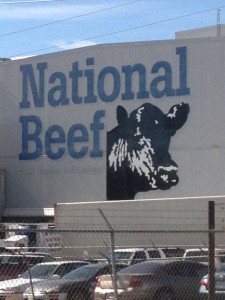 As Jamie headed east outside of town she needed to make a turn. Approaching the intersection, she looked for oncoming traffic. Peering into the sun, she saw that it was clear and slowly proceeded to turn north. Suddenly, a brilliant silver streak appeared from nowhere. As it flashed by she continued her turn. She didn’t feel an impact, she wasn’t hurt, and she only had a feeling of bewilderment. Her thoughts were scrambled as she tried to process what had happened.

Martin could clearly see a pickup facing him with its turn signal indicating a turn across the lane he was travelling in. The pickup was moving slowly and he anticipated that it would stop and make the turn once he passed. To his amazement, the pickup turned broadside into the path of his oncoming truck. Instinctively, he took evasive action. Cutting hard to the right, he went off the pavement and onto the narrow strip of dirt that borders the highway. His cab narrowly missed the vehicle.  While staying in control, he tried to bring the truck back onto his original lane and keep his load upright. Unfortunately, in order to miss the pickup, the rear of the trailer went off the dirt shoulder. Slowly, Martin could feel his trailer, then his truck begin to roll onto its passenger side. 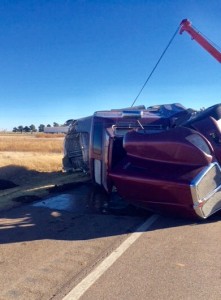 Jamie was in shock; however, as her senses returned, she realized what had just happened. She stumbled from her pickup and hurried toward the overturned truck and trailer. In the distance she could see the truck driver lying face down on the pavement in front of the truck, not moving.

Slow motion is the best way Martin can describe the rollover of his truck. He could feel the trailer pulling the cab over and there was nothing he could do to stop it. The final jarring impact left him suspended in his seat belt. He immediately turned the engine off and fought to free himself. It was only later that he realized he had been trying to find the seatbelt buckle on the wrong side of his body. He wriggled out while the belt was still buckled. Remembering a similar incident where the driver perished when his truck caught fire, Martin began kicking at his windshield. His body felt hot, but he had no time to check for injuries; he needed to clear himself of the truck. After several frantic kicks, the windshield gave way and he crawled out, lumbering away from the truck. He fell exhausted, face down on the cool payment. His only concern was if the people in the pickup had survived the crash. 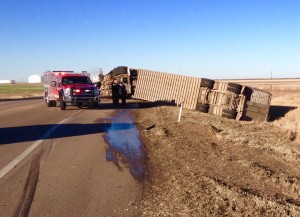 Martin was laying still on the payment when Jamie reached him. She was in shock and worried that he was hurt seriously. While she was concerned about his injuries, he kept asking about the people in the pickup. Repeatedly, he asked her to check on the people in the truck saying he had done everything he could to avoid the accident. She reassured him that she was the person in the pickup and everyone was alright.

The cool morning pavement felt good under Martin’s adrenalin filled body. A lady who had witnessed the accident quickly covered him with a blanket. She assisted until emergency personnel from the fire department and the highway patrol could respond. Martin was taken to the hospital emergency room. 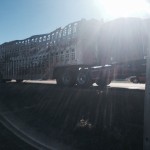 Martin shared, “I broke my finger and have a bruise where the seat belt caught me, and that is all. I am now the biggest believer that seatbelts save lives because I feel it saved me from serious injury or death. All professional drivers wonder how they will react if something like this were to happen to them. You have no time to think, you just react. All the times I have driven down the road  thinking about what I would do if something like this happened, paid off today.”

“He endangered his life to save mine! He has five children and a wife and he chose to risk his own life to save me. I am so grateful and humble. From the moment I met him until now, his only concern was about me and how I am. He’s told me he is alright, that he will get another truck, and for me not to worry about him at all,” Jamie said.

Both Jamie and Martin want to share that it is their belief in Jesus Christ and his protection that prevented either of them from serious injury.