Karen Winfrey began her career at National Carriers in 1979. Many of our current employees were born after her employment began. For folks to appreciate the typical American’s life as Karen knew, she recalls some of the events from 35 years ago.
The top box office movies included a Vietnam flashback, Apocalypse Now, a reflection of a dancer/directors life in All That Jazz, and a real life look at divorce in Kramer vs. Kramer. The Movie Academy award for best picture went to The Deer Hunter and Billboard’s Album of the Year was Saturday Night Fever by the Bee Gees. Ervin “Magic” Johnson and Larry Bird began a long and storied rivalry as Michigan St. defeated Indiana State for the NCAA Men’s basketball championship. Wimbledon women’s tennis was in its heyday as Martina Navratilova defeated Chris Evert Lloyd in the final match. Pittsburg, PA hosted both the NFL Champion Steelers and MLB Champion Pirates.
class stamp was $0.15 and gas was $.86per gallon as the price of oil reached a new record of $24 per barrel. Median Household Income was $16,461 and bank interest rates were 15.25%. An overheated reactor at the Three Mile Island nuclear facility in Pennsylvania cause hundreds to evacuate their homes. Actor John Wayne and former vice president, Nelson Rockefeller both passed away.

Internationally the Shah left Iran after  a year of turmoil as revolutionary forces under Muslim leader, Ayatollah Ruhollah Khomeini, who took over as Iranian militants seized the US embassy in Teheran and held 63 hostages.  Margaret Thatcher was elected as the first women Prime minister in the United Kingdom. 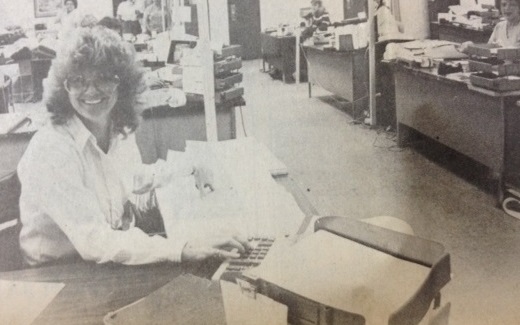 Karen was hired at NCI to assist settlement manager, Twyla Denny. Karen was responsible for collecting trip sheets daily from dispatchers who kept hand-written entries in a large dispatch record book. Everything was hand-written in the 1979 National Carriers office. The only electronic equipment Karen used was a 10 key desk calculator. She would use the Official Transportation Mileage Guide (a huge map) to determine the miles each truck ran the previous day.  Next, she would look up rates in “the tariff book” and write in the rates for each load. During this period, trucks were paid as loads were completed, there was no set payday.
“It was a circus keeping up with the rates. Making sure if the dispatcher offered a special load rate, that our invoicing and settlement departments were properly informed was a constant concern,” she reminisced.
As time passed, she was promoted to the head of the settlement department and later as office manager. Settlements began to be paid weekly as computers were introduced in the nineties. According to Karen, when computers were introduced “life changed”.  During this period she became known for her ability for archiving records. Her habit of keeping information became a valued commodity when questions needed to be answered concerning past situations. On September 11, 2009 she stepped down from office/settlements manager to concentrate on dealing with termed trucks and their issues.
“I have seen National Carriers go from 100% handwritten information gathering to 100% computerization, from everyone having an L –shaped desk to modern cubicles, from punch cards to  scanning time clocks, through several company presidents and ownership changes. While I have been here we have had offices in Kansas, Texas, Iowa, Indiana, Illinois, New York, Minnesota, Georgia, New York, Tennessee, North Carolina, California, Missouri and Arkansas.” Karen shared.